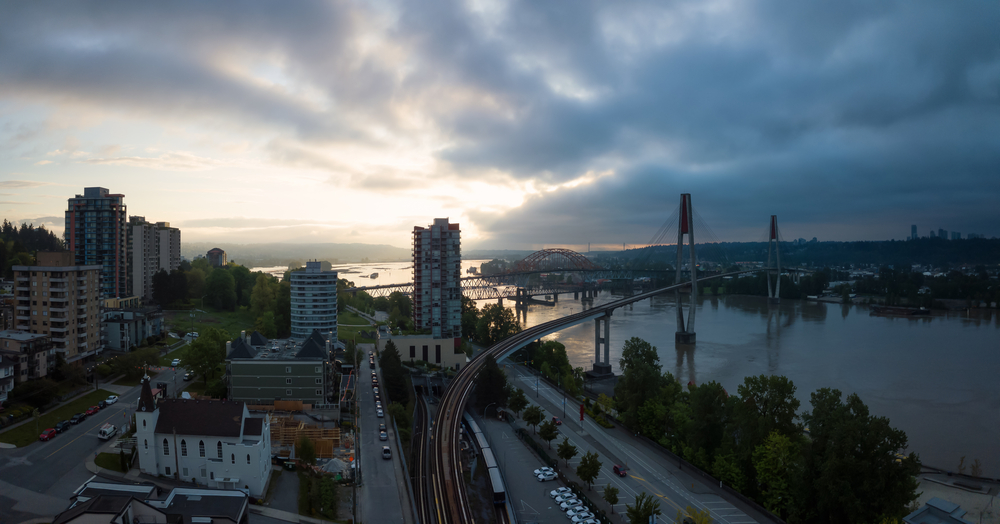 New Westminster is proud of the city’s long history, the settlement being created in 1859 by the Royal Engineers who came from England to establish the newly claimed colony of British Columbia.  With a key defensible position on the Fraser River, the team was awed by the beauty of the area, the abundance of timber and game, and what appeared to be a safe, inland, navigable waterway. The area around New Westminster had been occupied for eons previous, though, thanks to abundant fishing and hunting.

A known fact about New Westminster is it is contained and surrounded by many other parts of Vancouver. As part of the south mainland, and considered part of “Vancouver proper”, the town sees considerable traffic from residents and local businesses but also people passing through from Port Moody and other parts of the region.  As the original capital of the territory, “The Royal City” was a passing through point for gold miners headed to the Yukon and Klondike.  Accessed by the Canadian Railway and later Hwy. 1 brought many travelers to the area. New Westminster also was the scene of several tragic fires that leveled the downtown, nearby Chinatown. Once a bastion of all things British crown, New Westminster is now a mixture of cultures, languages, and architectural styles built around Victorian mansions and historical buildings being repurposed, such as the “Skookums”, the 140 year old BC Penitentiary that now houses offices.

Driving around New Westminster can be a challenge, thanks to unending urban renewal and transient traffic. If you do not have solid skills at knowing how to avoid issues in traffic, rain, or from frustrated drivers, you might not have the confidence you need to safely navigate the waterfront or other parts of the city.  Driving schools in New Westminster focus on getting you to pass the road test, but sadly many people do not make it on the first try, and sometimes it takes many expensive tries with a wait between each attempt. The reason is they do not have the fundamental skills and knowledge needed to pass the test and show the examiner they really do know how to drive safely.

My name is Marcy and I owned one of the top driving schools in western Canada for many years. I also am one of the most highly regarded driving instructors in Canada. Many students were sent to me that simply could not pass the driving test. I had no problems teaching them what they need to know, turning them into confident, happy drivers. I realized after years of talking to my students that what I did different than the other schools they had spent money with, was I taught them the foundational skills needed to drive and most importantly explained why they needed to do these things. That might sound surprising, but when I explain, you will understand the problem immediately.

Young people do not observe how adults drive any more, as they can be busy with electronic devices while going places now. They do not see, think through, and file away the information with many repetitions of how the driver handled the car to slow and turn, what they did to blind spot check and merge safely, or the safe way to drive on wet roads or ice. They do not even know how to watch for landmarks to know where to go sometimes because of this. I also learned when they failed and tried to get online help, there was nothing online to teach what they desperately needed to learn. Click below to wee what some of them had to say.

I spent the next several years developing, filming, and building the Digital Driver Education course. It is a series of easy to watch and understand bite size videos taken from the driver’s seat, with detailed explanations of what to look for, the mechanics needed to execute, and successfully do what you need to in any given situation in a car, whether you are making a left turn, understanding right of ways or must immediately know the safe way to pull off the road when there’s an emergancy vehicle. The entire course is very reasonably priced at $197, which gives you a full year of access. You can watch each segment one at a time, in sequence, or go back and refer to parts you need to study as many times as you want. It is suggested the adult riding with you for driving practice watch the videos, too, so you both have the same safe, accurate information when you need to use the skills out driving. I am so sure the course will help you learn the fundamentals you need to be a safe driver, not just pass the test, that I offer a full money back guarantee for 90 days after purchase. If you ever need help or have questions, you can reach me at the head office, and I will personally take the call.

If you have spent a lot of money trying to learn to drive and still don’t know the foundational skills or if you are just beginning, click below to get started. With Digital Driver Education an amazing system to help you to feel safe, confident, and become a skilled driver.